Includes such features as: 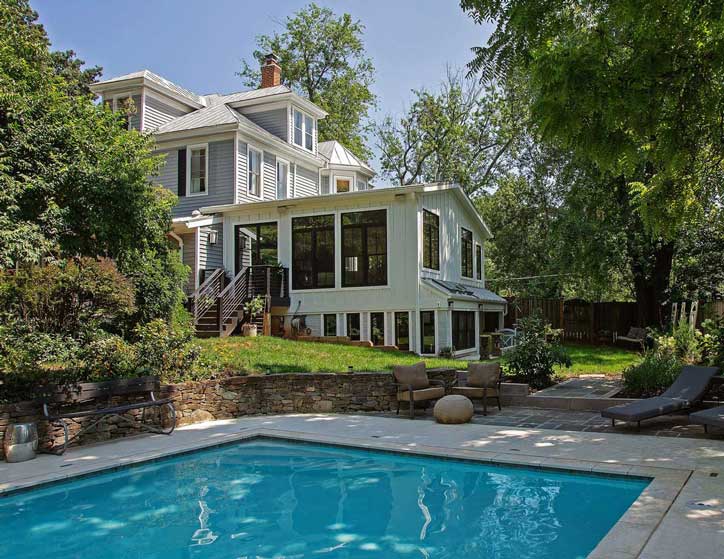 This 100-year-old home is located in a historic part of Burke, VA, and contained a 1970s previous addition that was failing. It was dark, had a sagging ceiling, gaps in the fireplace wall, and a non-functioning exterior door. An awkward multi-level deck made it difficult to access the backyard and pool area.

Since the homeowners entertain frequently, they wanted ample space for gathering with family and friends in a warm, inviting family room with a pool view and access, and a lower-level recreation room with a pool-accessible bathroom.

They also wanted to seamlessly blend their contemporary design style into the interior space while maintaining the historic look and feel of the existing home.

The existing family room was dark and dreary, with few windows, and had an awkward step-down between the main house and the addition. By raising and leveling the floor, the room became flush with the first floor and resulted in a more open, airy and functional living space.

To match the existing aged, heritage hardwood floor, we sourced reclaimed pine flooring from another 100-year-old home, sanding and finishing it to seamlessly blend together.

Since lighting was an important design feature, walls of windows were designed into the floor plan, promoting health and relaxation. The homeowners wanted the addition to allow in as much natural light as possible, so the walls were specifically engineered to accommodate that need, allowing for wind bracing and stability. We also had to work within the confines of the existing historic roofline as to not block the windows in the floor above.

For dramatic effect, ceiling planks and faux beams were incorporated into the stick-built vaulted ceiling. The design elements purposely draw the eye upward and give the entire room a larger, more open feel.

Within the new two-story addition, a striking interior staircase ties together the new family room and the lower-level recreation area. The lower level of the two-story addition includes a basement recreation room with direct pool access, a pool-accessible bathroom, and a storage area.

Walls of windows and four skylights are prominent features, with several windows below ground level. As intended, these windows fill the recreation room with light and pool views. The wet bathroom is designed with a comfortable changing area, toilet and shower. A beautiful antique sink and an original historic door complete the look in this basement bathroom.

All Hands on Deck

The original deck had many small levels, which was difficult to use for entertaining, and offered limited access to the pool area. After removing the deck, we carefully designed two direct access points to the backyard: upper-level stairs from the family room, and lower-level access from the walk-out basement. As with any remodel, no project is without its challenges. Our first challenge was in how to design a two-story addition on a home that was 1½ stories deep—especially after discovering that the home was not resting on standard footings. In fact, the timbers had rotted and the home was sitting on a crumbling stacked foundation built in the 1920s. A quarter of the house was literally floating!

The Schroeder Design Build team rallied for a solution. We removed the existing deck, excavated huge concrete pillars, and placed individual posts to hold up the house. Then the foundation area was dug out so we could install temporary piers while setting the permanent piers. The foundation had to be set as quickly as possible and we had to hold the dirt in place while excavating. Not an easy feat with two straight weeks of torrential rain!

Our second challenge came when we discovered an abandoned well or septic system after removing the existing deck, along with electrical issues. Of course, these items had to be handled for safety purposes and building code requirements.

The new two-story addition has greatly enhanced our client’s enjoyment in their home. They now have a warm, open and inviting place to entertain and relax. They also have direct and convenient access to their pool, with breathtaking views of their backyard.

This incredible project was entered into the 2022 PRO Mid-Atlantic Remodeler of the Year Awards, and took first place: the Grand Award in the category of Residential Addition $350,001 to $550,000! Back to Home Additions